Bundoran’s new owner writes:
“Dear Mary, I lost my Dutch Dressage horse to an aortic aneurism. I had been hunting for seven months for a new horse and came upon Mary Howard’s ad for the Dutch Dressage Horse, BUNDORAN. The ad was smart, had attractive pictures, and a lovely video. I only had my new computer three days and this was fantastic so I planned a trip to New England. I am a certified dressage instructor from DE and had some fabulous rides on Bundoran. I was really excited about this horse and my ride. I became doubly excited to learn that he passed the vet check.”

Bundoran is a 17.2h 8-year-old beautiful grey gelding by Joshua out of a TB/Hanoverian mare. He has lovely big gaits and is a dream to sit. He is working Second and Third Level with the changes and half pass being very easy for him. Last year, Bundy made his debut showing at Second Level with good scores. He will be at his first show this year at Second Level, soon to move up. He is also a good hack as well as a good jumper. His sweet, level headed disposition makes him a joy to have around. He loads and ships well and handles easily when at home or away.His grandsire, the late Dutch Preferent Stallion Roemer, competed at Grand Prix level in both dressage and jumping. His sire Joshua was USDF All Breeds Reserve Champion at both Prix St. Georges and I-1. Joshua was Champion Stallion at Hilltop Farm Oldenburg/ISR Inspection. Dam was Champion Filly at NEDA Breed Show. Bundoran is suitable for an ambitious amateur, junior, or professional. 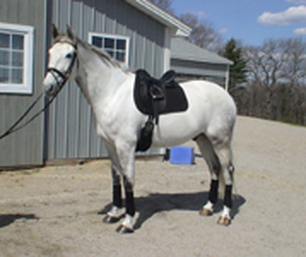 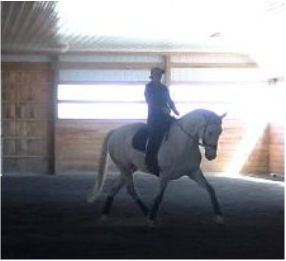 See more horses that  have sold.